The mock trial course teaches the fundamentals of evidence and trial procedure and prepares students to participate in the YMCA Youth and Government mock trial program. Students assume lawyer or witness roles and prepare the State case to go up against other schools in a realistic trial scenario. The District competition is at the end of February; the Washington State competition is at the end of March.

Mock Trial is both an academic Window class and a competitive interscholastic activity open to all classes. It includes weekly after-school practices downtown from October through March. Students receive a CR ("credit") grade on their transcript.

Program Head Jennifer Freeman has been coaching mock trial for nearly all of her 30 years of teaching. She began coaching at Garces Memorial High School in Bakersfield, CA, and has continued to coach for most of her years at Seattle Prep. In addition to coaching at Prep, Ms. Freeman also works with the YMCA as part of a state mock trial advisory committee. She is a graduate of the University of Notre Dame and teaches in both the mathematics and English departments at Prep.

Andy McCarthy has coached Seattle Prep’s mock trial team to fifteen state championships and ten top-ten finishes at the national competition, including the National Championship in 2014. He teaches English at Prep. He graduated from U.C. Berkeley’s law school in 1989 and practiced law in San Francisco and Seattle before joining Prep’s faculty in 1995.

Andy Hendricks has lived with the law his entire life as his father is a lawyer in Snohomish County. His father served as a prosecutor, defense attorney, and a judge pro tempore at various points of his career. In college, Mr. Hendricks took a variety of Constitutional Law classes and played with the idea of pursuing the practice. Life took him in a different direction, though, as he took what was to be a temporary position at Prep. Mr. Hendricks has now been a social studies teacher at Prep for 35 years! Besides teaching and mock trial, he serves as the women's soccer coach at Prep. 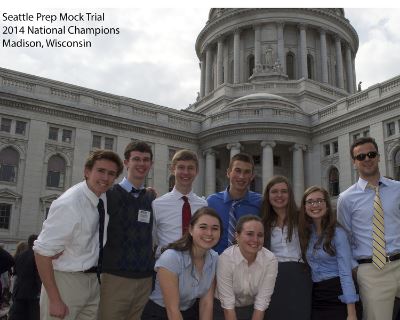